The third race in this year’s Subaru Niagara Running Series was the Peachbud 10K/5K which was recently renamed “Jerry’s Peachbud” in honour of the former series director Jerry Friesen. This has been the largest (attendance wise) race in the series for the past few years, and the renaming was a great tribute to Jerry. It was cool to see the “Run On Jerry, Run On” banner out on the course and his legacy definitely lives on in these races.

I decided to run the 10K course again this year, and was happy that the weather was cooler than I remember it from the past two years. I had set two goals coming into this race. The first (and higher priority) was to run a conservative pace and focus on my HR like I did in the Jordan 5K. This course has more uphill in the back half and it is easy to blow up if you go out too hard. I am also focusing on improving my pacing discipline so that I am ready for my 50K race in Sept. My second goal was to set a new PR and hopefully get under 38 minutes. My old 10K PR was from this race last year where I finished in 39:24. I was confident that these 2 goals weren’t mutually exclusive but I wasn’t going to sacrifice the first to get under 38 minutes.

Runners ready to start the 5K

And they’re off in the 5K Race

We started at 7:30 and I immediately settled into my pace. I started out around 3:40 min/km and my HR was in the high 150’s – exactly what I was hoping for! I kept myself distracted from the race by trying to focus on the course rather than the people. I really like the Peachbud 10K route – it’s a nice mix of downtown and quiet residential streets. There are lots of turns and hills to keep it interesting, and there are always tons of awesome volunteers at the aid stations which is very motivating.

My HR was slowly climbing but I kept tabs on it and kept adjusting my pace to keep it in the low 160’s. You can see in the second graph that I managed it well so that it gradually climbed over the 10K but I always felt good. I waited until about 9K to push the pace, and then sprinted the last few hundred metres to get in under 38 minutes. I finished at 37:58 on the clock and felt strong – both goals achieved. I ran the first 5K in 19:10, and the last 5K in 18:49. More importantly I maintained a steadily increasing HR for the full race (in spite of the hills!). I posted two graphs to show off my pacing success – the first shows my 5K and 1K splits in terms of average pace (min/km) and the second shows avg and max HR for each 1K split.

My Avg and Max HR Splits (for each km)

We stuck around afterwards until the awards were starting. The post-race food was great once again. When the awards for the 10K started, the announcer indicated there were only awards and medals for first place in each age group so we packed up the kids and headed out (it was well past their bedtime at this point). Normally medals are given out for top 3 in each age group so I’m not sure if this is a change for the series or just this race. There seemed to be some confusion with the finisher medals as well so it may have just been miscommunication about the age group awards.

Another great race night in Grimsby, and next up in this series is the hilly Beamsville Bench race in July. 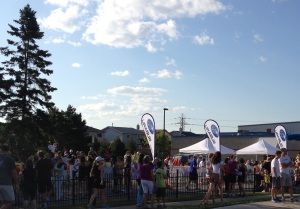 Lots of people out for another great Peachbud Race 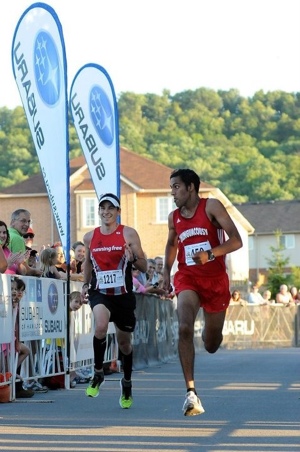 I had to include this photo – I seem to be pretty happy catching the other guy off guard! Unfortunately I didn’t catch him in time!
Photo Credit: Mike Cheliak – mysportsshooter.com