As a follow up to my recent review of the torpedo front hydration system, I wanted to write a post about the equally awesome X-Lab rear hydration system I put on my bike for this year. 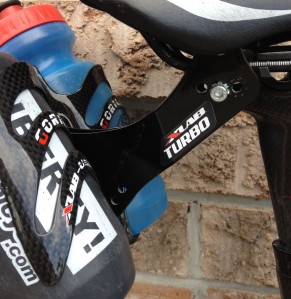 Again, I considered my options (mainly by searching the internet for reviews like this one!) and came to a decision based on cost, performance, and looking good! The system is made up of the “wing” which mounts to the saddle rails, and a pair of bottle cages which mount to the wing. For the wing I decided on the Turbo version. It is a step down from the Super and Carbon wings, but I decided that in this case, less cost had to win out over less weight. Once you have the wing, pretty much any standard bottle cages can be mounted, but I went for the X-Lab Gorilla Cages since they were designed with this purpose in mind. The challenge with rear mounted bottles is the tendency for them to eject when you hit a bump. These cages are designed to provide more surface contact with the bottle so, based on my understanding of physics, they should grip it better – sold! 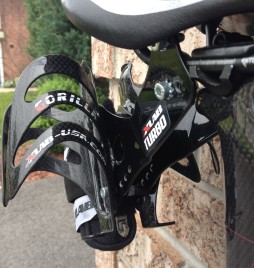 Installing the system is a relatively easy process. Each side of the Turbo Wing bolts onto the seat rail and then the cages are mounted on each side into a threaded spacer. The Turbo Wing comes with excellent installation instructions (complete with photos!) The only decision to be made was what angle I wanted the bottle cages to sit at. Initially I decided that I wanted them as vertical as possible for two reasons – reduced chance of ejection and having them closer to the seat. The angle is set using a choice of 3 holes on the Turbo Wing. I attached the mount, bolted on the cages, and then tightened everything appropriately (remembering to mind the torque for the carbon cages.) 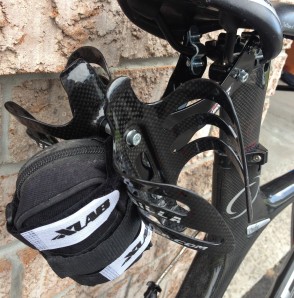 Close up view of cages and seat rail mounting hardware

Once installed, everything felt nice and tight – again I was impressed with the X-Lab product design. The various components fit together perfectly and once attached, it felt like a part of the bike.
The Turbo Wing also comes with straps to attach one of X-Lab’s storage bags. This is handy since the mount bracket takes up the space where you might normally attach a seat bag for your spare tube, etc. I didn’t order an X-Lab bag, but I was happy to see that my existing seat bag was small enough that it fit in the straps and would work for now.

An important reminder (that X-Lab includes in their installation instructions) is that you want to get the cages mounted right the first time. The mounting bolts are pre-treated with loctite, and once they are set they shouldn’t be removed. If you do have to remove them, you would need to reapply the right type of loctite. This means that if you want to remove the bag mount straps, you would have to reapply loctite when you reattach the cages. Not a big deal, but something to remember if you plan on making changes.

After the first ride I found a problem with my near vertical bottle mounting angle. With the bottles so close to the seat, and sticking straight up, I was having a hard time getting my leg over the saddle without hitting them. This was a problem, and would be an even bigger problem in transition during races. Luckily this was easily fixed by reattaching the Turbo Wing using the next hole, which tilted the whole system downwards. The Turbo Wing saddle rail bolts use lock washers, so there was no issue with having to reapply loctite in this case. The cages were now at a shallower angle which didn’t interfere with me getting on and off the bike. With the bottles at this angle I haven’t had any problems with ejection from their cages. I still have yet to have them move at all over normal bumps, train tracks, etc. Very impressive.

I am very happy with this product so far. The Gorilla carbon cages are solid and super grippy, and the Turbo Wing feels bombproof. Again, it’s not the cheapest option on the market, but from my perspective you pay for the quality of the product. Now that I have it installed and adjusted, it feels like it was designed for my bike. I don’t feel like I have to constantly worry about bottles falling out, or cage bolts vibrating loose. I would definitely recommend this if you’re looking for a rear cage system. 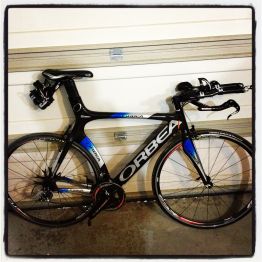 Con’s
Nothing negative to say. The price is high, but you get a high quality, well-built product for your dollars.