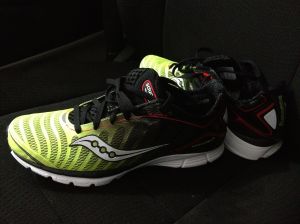 If you have read some of my other shoe reviews on this blog, you will know that I do a lot of my running in Sauconys.  The Kinvara has seen the bulk of my road kilometres over the last year or so. I started with the first Kinvara which I thought had its pros (lightweight and low drop,) and cons (too narrow). I tried the Kinvara 2 last summer and was pleased with the changes that were made (wider toe box). This year Saucony has upgraded the Kinvara again, and the 3rd version has significant changes while maintaining the original aspects I liked about the shoe.

The upper still looks unmistakably like a Kinvara but it has undergone a number of changes. The most noticeable is the outer material. They have done away with the stiff, plastic feeling outer from the 1 and 2 and replaced it with a softer mesh overlain with what Saucony calls Flexfilm. These are ribs on the mesh that provide some structure and support to the shoe. The combination makes for an upper that feels softer and more flexible than the first two models. I like it! 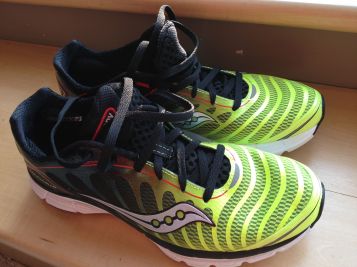 There’s no missing these shoes!

The outsole is the most visibly changed part of the shoe. I would guess that Saucony undertook the redesign in this area to address concerns from runners about the wear levels on the soles of past versions. I was generally pleased with the durability of my Kinvara soles, but have heard/read reports of issues with premature wear. I think I am lucky that my running stride has evolved into what the Kinvara designers had in mind, so the design worked for me. That being said, the Kinvara 3 outsole appears to be even better.

I compared a pair of my Kinvara 2’s that have just over 500 km’s (310 miles) on them with my new Kinvara 3’s. The places where I was wearing out the EVA foam part of the sole were mainly on the outside toe area. Saucony has added rubber to this part, and even more on the inside toe area. Looking at my old shoes, I would have preferred the larger rubber section on the outside toe area but time will tell if the overall changes will improve wear in this area. I also wore through the toe rubber on one of the old shoes, and this area seems to have been beefed up on the new shoe.

Saucony’s description of the added rubber.

The other outsole changes that seem to fit with my use are where rubber has been removed. Saucony removed the rubber on the inside of the heel of the Kinvara 3 and looking at my Kinvara 2’s, I had very little wear in this area. There is also less rubber in the midfoot area and again, I didn’t see much wear here on my other shoes so I expect this will be good for me. At this point I am happy with the changes I see to the outsole. It is hard to predict how much better durability will be, but based on my comparison, I expect it to be improved. 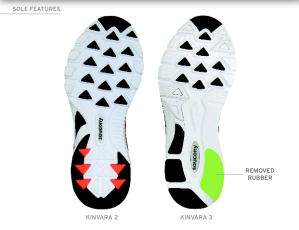 Saucony’s description of where rubber has been removed.

It looks like there will be a lot of nice colors for these shoes, but for now the only option available in Canada is the black/red/citron that I bought. They are definitely bright! Given my lack of style-sense I usually subject my shoes to a standardized aesthetics test – whether my wife likes them or not. In this case she did, so they pass!

I haven’t run a lot in them yet, but based on my comparisons and a couple of runs, they seem awesome. I am used to running in Kinvaras and this shoe feels as good as the others in my closet right out of the box – the changes certainly haven’t made them feel any different. Keep up the good work Saucony! I will update my review once I have more kilometres on them and let you know if my positive initial expectations have been met.

Saucony has a cool website where you can see a lot more detail on the Kinvara 3.