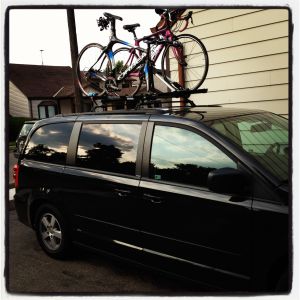 This weekend we packed up our new minivan and headed up to Woodstock for our first duathlon of the season. My wife and I both registered for the Sprint Duathlon on Saturday. I must say that as much as deciding to buy a minivan caused us some great consternation, it really is the ultimate race vehicle (other than a motorhome, which would be my ultimate dream!) The storage bins in the floor are perfect for storing helmets, shoes, water bottles, tools, pump, etc, etc, etc. Once you park, the van becomes base camp where you can get everything ready in the comfort of your own personal sanctuary! Anyway I’ll save my van pros and cons for a future van review and get on to the race.

I had my typical pre-race routine – very little sleep, crappy (health wise) dinner the night before, not enough hydration, and an early wake up call. It was a 9AM start, so we got the kids, gear, babysitting family members, and us loaded up and hit the road early. We got to the site easily and there was tons of parking. We quickly disembarked and headed to the registration tent and picked up our numbers. These races are always well organized so this was quick and easy.  The Woodstock race site is great because it is at Pittock Lake Conservation Area which has lots for the kids to do – playground, beach, etc. One near catastrophe we had was not picking up our timing chips after we got our race numbers. It wasn’t until I was out warming up and saw someone with a chip strapped to their ankle that I thought about it, so we quickly headed to sportsstats and grabbed our chips (and got our numbers/ages marked). No one reminded us about the timing chips and we had both become accustomed to the Subaru running races where the chip is integrated in the number bib. Thankfully we averted this disaster and soon it was over the start line.

The race is a 3km run, 20km bike, and 3km run. Sounds short and easy, but I find these short races are every bit as hard as longer ones due to the higher pace.  This was my first time doing this race, so I wasn’t familiar with course.

I figured I was in a position to do well in this race, so I lined up right at the front. Normally my confidence isn’t high enough and I end starting a few rows back from where I should be and spend lots of time dodging and weaving in the early going. At the gun there were about 5 others setting a high pace (low 3:00 kms) so I sat in the back of that train and held on. Soon this group thinned to 3, and then just myself and another racer. I stayed on his shoulder for the rest of the first run, happy with the pace he was keeping, and not wanting to push my luck any faster.  We ended up running close to a 3:30 split which I was happy with.

Lots of bikes in transition

First transition was decent (for me) but I really need to work on this to be competitive. I started putting my cycling shoes on and looked over at the lead duathlete only to see him already heading out of transition. I still had to do up my shoes, unrack my bike and get going! I was over 20 seconds slower than the winner in this transition alone!

I had hoped I could make up some time on the bike but this was not to be. I had an uneventful ride, but one that I was happy with. The course is on country roads with lots of gently rolling hills. During the ride I realized it was my first race on the used Orbea tri bike I bought last fall and I was quite happy with it. I was keeping a good pace and steadily picking off tri riders from the early start waves. Its nice being up front where you aren’t dealing with nearly as much bike traffic. I was a little slower than I had hoped (34.6 km/hr average) but did what I could!  Soon it was back into transition to head out on the last run leg. 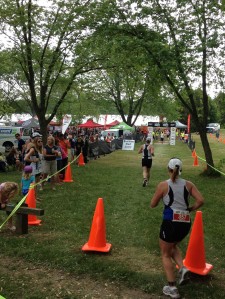 Coming into the finishing chute

The last run follows the exact same out and back course as the first. The run course is mainly on gravel roads with a short section of asphalt where you cross a dam at the far end of the lake. Its a nice closed course, with clearly marked kms and turnarounds. I struggled with a bit of calf cramping in the first km, and was definitely slower than the first run (3:58 min/km) but I managed to hold on and cross the line in 2nd overall. I finished in 58:52.

I was happy with the race – I felt like I had a strong first run, and a decent bike and 3rd run. Racing only a few multisport races each season, its hard to get into the groove of the technical parts like transition, so this is what I need to work on.  I was also super impressed with my wife who has been battling injuries all season and was hoping just to finish this race – she did that, and got 3rd in her age group.  An awesome race for her!

I chatted with the winner (Larry) after the finish and recognized his name from twitter posts and blogs that I had read. It was nice to put a face to the name, and meet one of the strong competitors in this race series.

We stuck around for the awards afterwards. The food smelled great but the line up was HUGE! The organizers addressed this, and apologized for it during the awards. Apparently it was a problem with a few missing cooks, and they assured everyone that it would be fixed for future races. Good for them to own the issue and deal with it.

I am hoping to race in Welland in June, and I look forward to another great Recharge with Milk Series race. I was given some chocolate milk after the finish of this race and it really is a great post race drink! The marketing is true!