I’ve been testing out a lot of pack and handheld hydration systems this summer but have left out the third commonly seen type – the waist belt.  I recently received the Ultimate Direction Thunderbolt hydration belt and have taken it out for a few runs to get a feel for it. 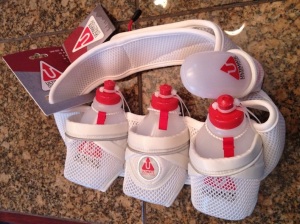 One thing I have realized from reviewing various hydration options and hearing/reading other’s opinions on this kind of gear is that nothing is good for every different runner in every different situation.  Personally, I have grown to like wearing a pack for long trail runs, but not on the road.  I don’t mind carrying a handheld on the road but it limits you to one type of drink (unless you carry two bottles of course!)  The nice thing about a belt like the Ultimate Direction Thunderbolt is that you could conceivably carry 3 different drinks and a flask full of gel.

The belt itself was well manufactured and seemed like a durable piece of kit.  The closure was a wide section of velcro at the strap ends.  This was great at securing the belt, offered an adjustment range, and didn’t have a buckle to get in the way.  The belt was made of a light, breathable material that didn’t cause any chafing while I used it.

3 bottles well secured on the back

The bottle holsters on this belt were great – the most well designed feature on the belt in my opinion.  I found that they were easy to get the bottles in and out of, while still providing a secure grip.  The stiffener around the holster openings made it easy to resecure the bottle without too much feeling around or requiring the use of 2 hands.  The Thunderbolt holsters also have an elastic loop if you want to provide extra security around the bottles, though I found no problems with them bouncing out while running without attaching the loops.

The one area I would suggest for improvement is with the bottles themselves, and in particular the drinking valve cap.  The caps are hard plastic which made for sharp edges and required a lot of force to open and close because of the stiff material.  I have used other bottles with a softer rubber type valve which is a lot more user friendly.  Of course, you can use other aftermarket bottles with the belt, but I would like to see it ship with an improved bottle design in the first place.

I found the belt bounced a bit too much when I tried it with all 3 bottles full on the trails, but was much better with 2 bottles.  I used it both on the trails and road and was happy with how it felt once I got it strapped on where I wanted it.  Again, I think hydration belt comfort is something that is very subjective and has a lot to do with running form and pace.  I tend to run at a faster pace which exacerbates how much a belt moves, especially when it is full (and thus heavy.)  For running longer, slower distances, the ability to carry 3 bottles would likely be welcome and worth the extra weight.

Another unique feature of this belt was the holster for an included 4oz flask which would typically be used for gels.  The gel flask holster worked very well.  Initially I wasn’t confident that the holster would effectively secure the little flask on the belt, but I found that it didn’t move at all once it was in there.  This is a great design and another useful option for longer runs where you want to carry more than a couple gels in an easy to use container.

The Ultimate Direction Thunderbolt hydration belt also had a small zippered pocket on the front.  This was the perfect size to carry a car key, ID, card, gel, or a small mp3 player.  I typically used it to carry a car key, but it wasn’t big enough for my iphone.  It was located in a good spot on the belt where it didn’t get in the way at all and was always accessible.

Overall this belt would be a good option if you want the flexibility to carry lots of water and some nutrition but I liked that it gave me the flexibility to leave a bottle out when I didn’t need as much.  If you’re a hydration belt fan I think you would be happy with the versatility this one provides.