While the name is prehistoric (google it to see what 2 legged dinosaur it was) the Wave EVO Cursoris is Mizuno’s brand new entry into the cushioned zero drop running shoe arena. I still normally run in low (but not zero) drop shoes, but I liked the idea of the Cursoris as a good zero drop entry shoe that still had some margin for error in terms of cushioning.

When I pulled the Cursoris out of the box, I found that these shoes looked almost tame from a relative Mizuno sense! They were black and bright orange, but those two were the predominant colors. Mizuno colorways usually tend towards towards a more rainbow-esque and patterned scheme! I liked the orange – out on the mean streets I try to use any increased visual enhancement I can, since I’ve never heard of a car-runner altercation ending in favour of a runner. My bright orange forefoot (with an efficient, high cadence stride!) was more noticeable than a more subtly coloured shoe would be.

The sole of the Cursoris was a mix of foam and harder rubber to keep the weight of this shoe down. The forefoot area had harder rubber on the inside (big toe) half and foam on the outside. The midfoot was well protected with rubber across the centre of the sole and a strip on the outside. The heel had hard rubber on the middle and outside for durability to protect from the occasional heel strike. 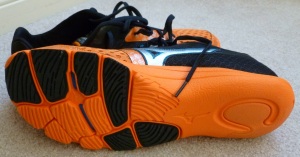 Nice balance of lighter foam and dense rubber on the sole.

In terms of fit, I found that the Cursoris ran slightly larger than my normal foot size which is common with Mizuno shoes. The forefoot area was plenty spacious, and I would suggest trying your normal size and a half size down to see what feels better. That being said, I was still comfortable running in my normal size 10 once I got used to the feeling. They felt roomier than other shoes (including size 10 Mizuno Musha) but I think this is part of the design so your toes have lots of room to splay. I wore my normal size in the Cursoris, the midfoot felt good and while the toebox felt big, I didn’t notice any sloppiness up front.

Lots of room in the forefoot

Ventilation definitely wasn’t an issue in these shoes. I would guess that the mesh on the forefoot upper was more open vent than fabric so there was lots of airflow. This airy forefoot design also added to the roomy feel I mentioned earlier. The rear upper was a more tightly woven fabric with a bit more structured feeling but it still felt nice and light. The heelcup was all fabric, with no stiffener insert. I liked how these shoes felt around my heel and ankle.

To be honest I haven’t run outside in these shoes enough to give unequivocal feedback on long term durability, but they seem to be OK. If you normal wear pattern follows the hard rubber placement on these shoes then you shouldn’t have an issue. Even for me, I found that the the softer foam sections weren’t wearing more than I would expect from road running. Of course I’ll need to put many more km’s on them before I know for sure, but there weren’t any red flags in early testing.

The Mizuno Cursoris will definitely be a part of my training shoe rotation going forward. I found these shoes to be good for shorter (10km and under) road runs where I want to focus on running fast and work on solid form. The minimal drop sole didn’t get in the way of my forefoot strike, but the cushioning made up for my less than perfect stride when I got sloppy. I found that these were a good balance for this. If you need a shoe for this purpose, or want to begin the transition to more minimal zero drop shoes, you should check out the Mizuno Wave EVO Cursoris.