A lot has happened since I arrived in Belgium almost 2 weeks ago. Fresh off the plane I got a few days to recover from jet leg in time for my first big race of the year with my new team, Baguet-MIBA Poorten-Indulek. The race to be the amateur version of the Handzame spring classic. I went in pretty stressed as my training leading up was far from good, I wasn’t punching the numbers and I was constantly feeling tired. I hadn’t been able to compare myself to anyone however, so this would be my first exam of 2014. At the start I felt solid and was constantly in the top 30 riders on the look out for a crosswind section where the field may split. We turned onto a highway that was under construction and the field lined out due to cross wind, potholes, and pylons placed with humorous sporadicalness in our path. I saw Lotto and QuickStep converging on the front and I knew the hammer was neigh on being dropped so I made my way to the front as well. Safely cushioned between a 10ft trench on my left and a gale force wind on my right I pushbike’d along in a state of relative comfort. After about five kilometres we swung right and to my great surprise the field of 150 was totally broken and I was placed in a nice group of 25 riders or so, nearly both the Lotto and QuickStep teams remained intact. 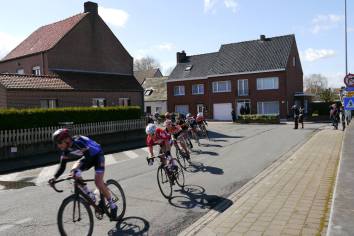 We trudged along and reached the finishing circuits with 50km to go, still intact as a unit of riders. In crosswind sections riders would gutter the group and make us all hurt for a bit. After 40km being constantly on my toes only 8 of us remained. QuickStep had lost all but 2 riders, Lotto was down to 4, then there was myself and the Belgian Amateur champion of a few years ago. My legs were feeling heavy and I knew I wasn’t going to win in the sprint as Rob Leemans and Tiesj Benoot from my team last year were in the group and the both have a wild kick. I sat back, waited for the others to fiddle. The current Belgian U23 champ from QuickStep attacked and Lotto jumped on it. The second he was reeled in, just before the 500m to go sign, I countered. The group hesitated and I got quite a lot of leash. 3 hours of full gas racing and riding into a block headwind I was just creeping. I saw the big metal sign over the road, a thousand people cheering madly, I gave it my all, cramped to bits, but alas the fairy tale ending didn’t come and I got swallowed up in the last 50m. 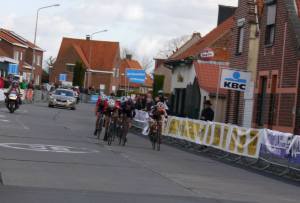 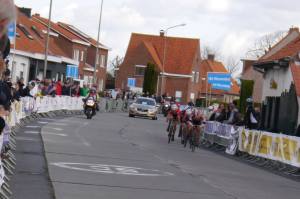 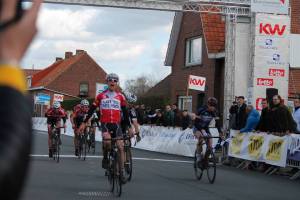 I was pretty pissed as that would have been easily my biggest win ever but I can’t not be happy seeing as I had no team mates and I was against a stacked group of riders. I guess Ill just have to keep waiting for the big one. I went on to race a kermis race (smallish local race) that Sunday and unfortunately flatted out. I went out again on Wednesday and tried but had no luck and rolled in with the bunch sprint on a ludicrously fast circuit.

I described a kermis as a “smallish local race” which it is to Belgium but both races had over 150 riders. Sunday had BMC and Leopard Trek development riders show up. Wednesday had an entire continental team, bus and all, as well as the GB and Japan U23 squads. These races are sometimes harder to win than the big races as they can be a complete raffle. They consist of constant attacking and suicidal moves to make it to the front as roads are normally about as wide as I am tall.

Aside from racing I’ve been going around with my buddy Quinten and spending my weekends near the coast with my road team captain Kristof. I got a belgian haircut against my will and ate frittes only once!

Funny story in the news here was how Obama was coming over, and at the same time the pro race Dwaars door Vlaanderen was on. Being the 100th year anniversary of the beginning of WWI both Obama and the Chief of Flanders Classics (race organizers) had the idea to visit the cemetery at Flanders Fields. Obama won, and the race got rerouted. Obama then went on to meet the Prime Minister of Nederlands. Obama showed up with black bullet proof cars via a closed highway, all that nonsense. The Dutch Prime Minister showed up alone on a bike. I thought that was kind of funny. On a sad note, but also intriguing being from a non cycling country, was how the biggest celebrity news all of last week was how Tom Boonen’s wife had a miscarriage. It was all anyone could talk about and all you heard on the radio, but seeing a pro cyclist in the general limelight for events in his personal life is something so foreign to me still. This weekend I am racing a couple more kermis’ and then resting up for an April filled with Amateur Classics, first with the gnarly cobbled race in Nederlands, Omloop de Braakman.