After months and months (and months) of waiting, my first 50 miler was finally upon me.  I registered for the 50 mile race in the Sulphur Springs Trail Run last fall, partly because it sells out and partly to force myself to commit to it.  With that amount of time I had a lot of time to prepare, but it never seems like enough.  In the week leading up to the race I managed to roll my ankle on an easy training run.  The next day I went over the bars on my mountain bike, with my body quickly returning to earth on a fallen log in the following order: helmet, cheek bone, collarbone, lower back.  With numerous scrapes and bruises I spent the week hoping none of these injuries would haunt me on race day.

A little nervous, but ready to go!

It was an early start to race day.  My start was at 6AM and the venue was about a 1 hour drive away.  I got up at 3:30, had a cup of coffee and a couple of pieces of toast, a quick rinse in the shower and headed out.  Everything was feeling OK, the weather was great, and I was ready to go.  Once I got to the start area, it was a quick trip through registration and then back to the warmth of my van to pin my number on and get ready.  I found a spot for my drop bag and took a few seconds to visualize where it was so I wouldn’t be hunting when I came through each lap!  It was a really cool early morning atmosphere with the tents around from the overnighters, and a great buzz from all the racers, volunteers, and spectators who were awaiting the start.  Soon we were off.  I was focused on staying in my own world and not getting caught up in a quick pace.  I wanted to feel like I wasn’t working hard enough, so that’s how I ran.  My main goal for this race was to finish it and also enjoy it.  I had a goal time in mind (between 8-9 hours) but no desires for a top-whatever placing.  I was going to run my race and not get caught up in anything else.

The first 20km lap was great.  It was nice and peaceful in the early morning hours with all of the 50 and 100 milers making their way though the beautiful forest of Dundas Valley Conservation Area.  The km’s ticked by and everything was feeling good.  My back concerned me a bit but I focused on trying to keep my core engaged on the uphills to support my back injury from the previous weekend.  This seemed to work.  I came through 20km a little faster than my goal time but not so much as to worry that I was going too hard.  I grabbed some food from my drop bag and headed back out for lap 2. 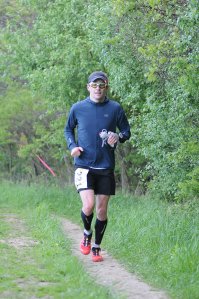 The 2nd lap started the same, but by the time I hit the back half of the loop it started to feel like a track race!  The 10, 25, and 50km racers had started and there were a lot more speedy runners flying through parts of the course.  I didn’t have any trouble with getting caught up in this, and maintained my pace.  The second lap went by much as the first had.  I was still feeling good, getting in my nutrition and hydration, and was still happy with how things were going.  I didn’t have anyone at the race watching me, but I knew a few people were thinking about me from various locations so I took a few seconds to snap a self portrait and post it while at my drop bag so they could see I was still smiling!

The 3rd lap was where I first started having some issues.  My left knee and both ankles were not happy, and it was mostly due to the amount of downhill running they were being subjected to.  I was going very easy on the uphills to moderate my effort, but the downhills were taking their toll.  I tried to focus on being efficient and light on the downhills, but realized that this is definitely something I need to work on.  This slowed me down a bit as I didn’t want to make things worse by trying to run hard on the downhills.  I got to my drop bag after this lap and it struck me that I was really going to finish this!

Heading out on my last lap I continued to run with a great guy I had chatted with a few times as we ended up together off and on throughout the race.  Alex was training for Badwater 135 that he is running later this summer.  I was really impressed by his pacing discipline and performance as he was running his 100 Miler as fast as I was running 50!  As we headed out for my last, and his 4th of 8 laps, he mentioned that it was his fastest 60km time ever.  I replied that it was the first time I had ever run 60km, so it was my fastest time too!  I was in uncharted territory, and I was amazed at how good I still felt (besides my knee and ankles).  We ran and chatted for a little while before our different pacing strategies separated us again (he pulled ahead of me!)  After this I was on my own for the rest of the race.  Mentally, I was on top of the world knowing that I was going to finish this race, and very close to my original goal time of 8 hrs.  I checked my watch around the 70km mark and knew sub-8 wasn’t happening, but I wouldn’t be too far off.

I came through the aid station at the bottom of the final climb and started up.  Each lap ended with a long gravel road climb up to the start/finish area.  All day I had walked the steep part of it to regulate my effort, and told myself that even though I felt like I could run it, I might need that energy later.  For my last lap, I ran it.  I felt good knowing that I was there, so close to the finish.  I was keeping an eye out for a good friend who was planning to come and watch the finish and I spotted him towards the end of the climb.  He had his camera and caught this clip of my last couple hundred metres as we ran together to the finish.  It was such a great feeling after so many months thinking about it.  I had run 50 miles.  I finished in 8:08:13 which I realized later that night was 7th place overall.

Happy to be done!

I managed to get my nutrition and hydration right for this race.  I carried a handheld bottle of HoneyMaxx sports drink with me for the whole race.  I had premixed bottles in my drop bag and swapped them out as required.  I drank water from aid stations on the course and had no issues with hydration.  I used Honey Stinger waffles, gels, and candies as my nutrition.  I ate one of these 3 things every 30 minutes (roughly) and again, had no digestion issues.  I was really happy with how this simple approach worked and kept me fueled (thanks to John McAllister for suggesting simplified nutrition approach after I struggled in a 50K last year).  I was really happy with how the HoneyMaxx helped me with a constant flow of carbs and electrolytes and without any of the GI issues that I’ve had before.

I really liked this course which (for us 50 milers) was 4 times around the same 20 km loop.  I broke each loop down into 4 parts that made it much more manageable from a psychological perspective.  Before the race i wondered a lot about how to keep focused during such a long time running.  I actually found the 8 hours went by really quick.  I focused on each of the 4 sections one at a time for each of the 4 laps.  The whole day flew by.  Now I am worried about the next 50 miler I’m registered for which is a point to point course – the bus drives me 50 miles down the highway, drops me off, and I run the trails straight back to the finish line.

After I finished, I hung around the finish area for a short time to give my legs a bit of rest, but had to head out to get back to Niagara for friends’ wedding reception that evening.  It was a beautiful afternoon and I wished I could have stayed to cheer on more runners, but I had a tight schedule.  Thanks to the Race Director, and all the volunteers that make this such a great race.  They were out there much longer than me, and did a great job.  At every aid station they were quick to make sure everything was going OK, and get me what I needed.  It was obvious to me why this race sold out every spot in every race.   I can’t wait to come back!