June 21.  The first day of summer.  The longest day of the year.  What better way to celebrate than blasting through the woods with old friends, new friends, and perfect strangers?  And so we did, at the 2nd race of the 5 Peaks Ontario Trail Run Series.  Heart Lake Conservation Area provided a great setting with dry trails, short climbs, and enough logs and roots to keep us on our toes. 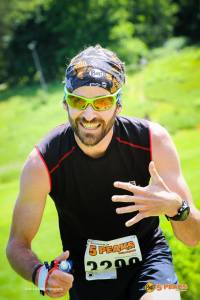 In case you can’t tell, this is the official 5 Peaks sign – I expect to see more of it at future races! (photo: Sue Sitki)

The distances were a bit longer than the first race, with a 7km loop for the sport course, and two times around for the enduro runners.  The course was great – really well marked (as always) and easy to follow.  The only time I was confused was right at the end where the RD had us turning hard left and ascending a wall of dirt instead of following the flat path… who does that?!  Oh right, trail runners do that!  The racing speed spanned from fast and furious at the front end (right from the gun) to a more moderate pace in the later waves.  Whatever speed people were going, they seemed to enjoy the course as much as I did – even on the short but steep climbs. 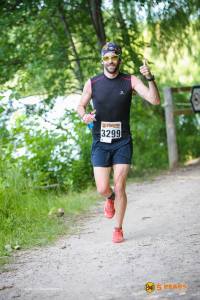 Thumbs up before I noticed the dirt cliff I was about to scramble up! 0photo: Sue Sitki)

I was happy with my race – I started off with a group of friends and kept the pace reasonable.  Towards the end of the first lap I headed off on my own and tried to maintain an honest, but sustainable effort.  These shorter races are tough for someone like me who likes the long slow burn of ultrarunning!  The second lap seemed to sail by much quicker with the familiar terrain, and before I knew it I was going down into, and back out of, “the bowl” valley that marked the end of the course.  I finished in just over an hour in 11th place overall.  I was just outside of my age group podium, so missed out on winning one of the super cool 5 Peaks medals. 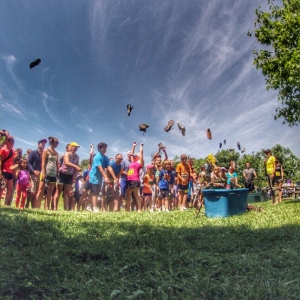 The ever popular shoe toss game. This time it was to win a Suunto M5!!!

After the race was the usual post race party in the sun. As always, the prizes were flowing from all the awesome sponsors: Buff, Suunto, Salomon, Kicking Horse Coffee, MEC, Clif, CEP, and Yurbuds. I managed to win a draw prize, took some pics of the always changing prize challenges and watched the speedy folks step up to the podium.  Another great 5 Peaks day to kick off our Ontario summer! A great bonus was the on course photographer Sue Sitki (Sue Sitki Photography) who had a ton of photos posted within 24 hours of the race (which she also graciously shared for my blog!)

Next race is on July 12 at Rattlesnake Point Conservation Area.  Unfortunately I have to miss it due to a prior commitment, but its sure to be a good one!  The trail are super fun, and I have no doubt it will be a great race. 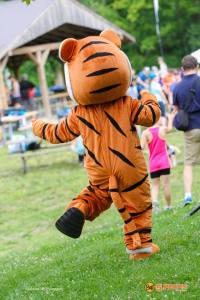 Buffy the Trail Slayer is dancing off to Rattlesnake Point for race #3! (photo: Sue Sitki)