I recently picked up a few soft flasks from Salomon (made by Hydrapak) with a plan to use them in an upcoming 50km race I am doing.  Since getting them I have thought of other ways to use them and realized they are a nice, versatile thing to have around for running.

The flasks are really simple – the main fluid section is made of the same material as a typical pack hydration bladder.  The drinking valve is a well designed bite valve (the same as you find on the Salomon pack bladders).  I found the bite valve worked really well, never spilling a drop even when squeezed (something I was initially worried about being a problem).

My main intent was to fill them with gel for longer races, but in the meantime I have been experimenting with other ways to use them.

I did a longer training run and had planned to use a hydration pack.  I decided to carry water in the pack bladder and mix up a higher concentration electrolyte drink for the flask, and stuff it in one of the pack pockets.  This worked out really well.  I was able to sip on the electrolyte drink, and had lots of water to wash it down.

I did a short trail race where I normally wouldn’t carry any hydration.  I tried out the soft flask for this, simply handholding it, and again it worked out great.  Salomon plans on releasing a product called the Sense Hydro S-Lab Set which is basically a strap for your hand that these attach to.  It looks like a skate ski pole strap with an attachment point to hold one of these flasks.  Unfortunately they won’t be available to the general public until Spring of 2013 – you can see them in the videos of Ryan Sandes at 2012 Western States 100 Miler.  They would definitely make these flasks even more useful. 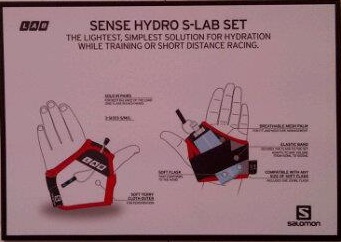 Preview of the Sense Hydro S-Lab Set (Image from @salomon_running)

They come in 2 sizes, I bought the bigger ones that are 8 fl.oz or 237 mL but they also come in a 5 fl.oz/148mL size.  The only warning I would give is that they really seem to take on the flavour of drinks that are put into them.  I used them with flavoured electrolyte drink, washed it as soon as I got home, and could still smell it in the flask.  This isn’t a problem for me because I won’t likely use them for water, but something to be aware of.

Have you used these?  I’d love to hear your feedback if you have good ideas for what to do with them and ways to use them.