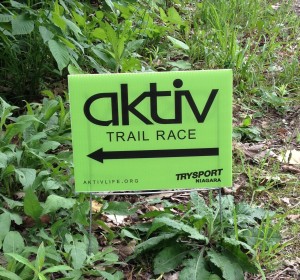 The 4th installment of the Aktiv Trail Series was my favourite one yet.  After being happy with the first race, but thinking I could run the course even faster, I followed up with 2 consecutively slower times.  In the meantime, other runners were getting faster.  Given that this is an 8 race series, I knew I had to change part of this equation to have a chance to stay on top of the overall series points.

While part of the issue in race #3 was related to injuries, I knew that I also needed to get my head into these races if I wanted to get any faster.  In the last two races I wasn’t racing smart and maintaining good pacing – I was either going fast, or walking.  In race #2 I was like a yo-yo with the runner in second place, and I wanted to even things out.  To do this I planned on making sure I maintained a focus on beating my race #1 time.  I also had the motivation of the standing race director’s promised award of gummi bears for anyone who went under 24 minutes!  Even more motivating was that tonight the gummi bears were actually wine gums, which I consider to be the finest delicacy in the land!

I stuck with my strategy of tucking in behind the leader for the first part of the course to help my pacing and keep me from blowing myself up right away.  I took the lead in the lower part of the course and tried to build a bit of a gap before we started climbing the escarpment.  I remained focused on pushing a hard but maintainable effort as the trail headed up.  I have typically power-hiked the steepest part of the course but tonight I pushed through and focused on getting up to the flat section of doubletrack where I could recover.  I knew that my gap wasn’t very big but I was trying to ignore the other runners.  I was carrying a bit of water with me, so I skipped the water station.  This was helpful because I have used it as an excuse to slow down and drink in past races.

So heading into the halfway point of the race I knew I was doing a much better job at pacing and just had to keep it up.  In the middle section of singletrack I focused on using the undulations of the trail efficiently by not slowing/resting on the little downhills.  I was soon through here, had a good climb up the last steep uphill and was out onto the gravel road.  I find this to be a mentally challenging part of the run – it is flat and short, but feels like it goes on forever!  I focused on maintaining a decent pace and not looking back and this got me through in good time.  Then it was into the upper loop and back out to the long, gravel downhill.  My knee and back were feeling significantly better this week and I was able to get down the hill much quicker than the last race.  At the bottom I didn’t think I had enough time to make it to the finish under the wine gum cutoff time, but I must have seriously misjudged the last distance because I ended up crossing in first at 23:27. 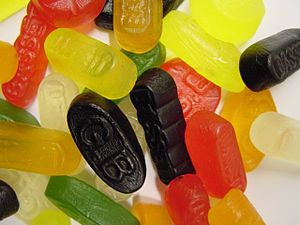 I was expecting Wolfgang (co-Race Director) to be at the finish line to shower me with wine gums, but he was nowhere to be found!  Regardless I was really happy with setting a new best time, but also with pushing through the mental barriers that have been slowing me down.  I am learning a lot by doing these regular races on the same course.  It is a short loop, which makes it challenging because you are going at maximal effort on varying terrain.

My wife had an awesome race too – she has been dealing with ongoing injury problems and is in a recovery period right now.  She ended up finishing as the 2nd overall woman, first in her age group, and was over 2:30 minutes faster than her last race.  Awesome!

I carried an 8 fl.oz soft flask from Salomon (made by Hydrapak) for this race with a diluted mix of GU Brew.  I plan on using these flasks for my upcoming 50K race but thought I would try one out for this short race.  It worked really well – I simply handheld it and had no problems carrying it.  It was great having something to get a sip out of when my mouth was dry, and I didn’t have to hit the water station midcourse.  I’ll try to post a quick review of these on the blog – they are a super versatile piece of running kit to have around.

Looking forward to the next race to see if I can continue to improve the mental part of my racing!