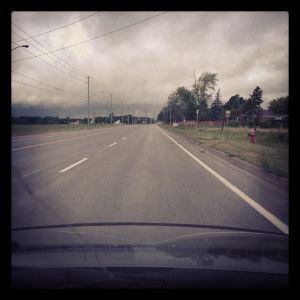 Ominous looking skies heading out to the race course

After weeks of completely dry conditions, we finally got lots of rain… the night before my first ever trail race, the Twelve Mile Creek Half Marathon – an off road race held each year in St. Catharines, Ontario.  It continued to rain all morning, finally letting up about 30 minutes before race start.  Perfect!  The sun even came out a couple of times.

The Niagara Region is blessed with tons of great trails for running. For 24 years the St. Catharines Roadrunners and Walkers Club has taken advantage of this and hosted a great trail half-marathon along the Twelve Mile Creek.  The creek (and race route) runs through the middle of the City and ends up in Lake Ontario. It was my first time doing this race (and my first ever off-road race) and I was super impressed. It’s got an awesome  “small race” feel, with great organization and setup. There were many participants that had run this race before (including one gentleman who has done all 24 years) but also a lot of first timers based on the number of raised hands when the starter asked at the start line.  The start featured one of the race’s unique traditions – a bagpiper marked the first turnaround which was about 300m from the line.

When the starting gun went off, we headed east towards the bagpiper then turned back towards the start of the trails. Right from the beginning I was being cautious of my pace and HR so that I didn’t set out too quick and mess up my race plan (see my related blog post for details of my plan.)  I felt like i was going slow, but forced myself to stay around 4:00 min/km on the road. On the way down to the start of the trails I counted about 6 or 7 runners ahead of me. By the time we got to the trails (after ~1.5 km on the road) I was in 4th, directly behind the eventual female winner. She set a perfect pace for me through the first section of singletrack. The rain had left this part of the route very slick with deep mud in some sections. There was a lot of slipping and sliding in this area and I was definitely glad to be out in front and away from the crowds. We came to the Glendale Bridge and I went ahead into 3rd position. I hit 5K at 19:55, exactly where I wanted to be, and surprised I was in 3rd overall. My HR was still hovering around 164 and I was feeling good, which I was happy with.

At this point The course opened up onto a long stretch of wide gravel pathway heading into downtown St. Catharines. We headed up and over the pedestrian bridge to reconnect with the recreational path on the other side of the creek, only to cross the creek once more back to the south shore. There was a lot of undulation in this section as the route goes over and under a number of highways and roadways. Eventually the 2 leaders passed me as they were heading back and they appeared to have just under a minute on me at the turnaround. There was an aid station at the turnaround with water, but also wine and beer (apparently another tradition!) I thought for a second it would be pretty hardcore to have a beer at the halfway point and still finish third, but realized the actual scenario would be that after a beer, a lot of walking and a DNF would be more likely! Just after the turnaround I hit the 10K split, and was around 39:30. I still wasn’t thinking too much about my placing, but with each km that went by I was more surprised to be holding onto third spot. The thought of an overall podium spot did seem great, but I was focused on my goal of running a steady pace so I still expected there would be some runners making a move from behind. The course continued back over the same trail that we ran out on. The wide path left lots of space for the runners going both directions which was good.

I hit the 15K point at 59:49. Everything was going the way I had planned, and I still felt great. Just before this point, I could see the second place runner up ahead. This was the point that made sticking to my plan the hardest. My instincts were telling me to close the gap and catch him, but I decided to hold my pace and see how it played out. Just before the 16K point, as I approached the Glendale Bridge for the second time, I caught up to the second place runner. I stuck on his heel through the next 2K of singletrack. This was the section that had been super slippery on the way out, and with 80+ runners and an hour without rain it had become much stickier. This made for less chance of falling, but much heavier feet when they caked up with mud!

We came up out of the singletrack together and hit the last aid station. The second place runner dropped his water so I offered him half of my cup rather than toss it (+1 karma point for me!) This marked the beginning of the last (and most feared) part of the course. I pulled into second place as we ran along the paved road on a steady uphill to the beginning of Hydro Hill – a 1/2 km stretch of gravel access road that rises about 60m, which averages out to be about a 10% grade (this calculation could well be wrong, so feel free to challenge me!). At the crest of the hill we headed back into the last singletrack section. At one corner in the woods a musician was standing just off the trail and serenading runners with his flute – another unique tradition that was a nice surprise! I was still feeling great and knew the finish line was close. I was worried that the guy in second might have a final kick so I tried to keep up my pace. We came out of the trails behind Brock University and then quickly turned and descended a set of wooden stairs into the final trail. The last part of the course was great a stretch of singletrack along the crest of the Niagara Escarpment before we dove into a rocky downhill that spit us back out onto the Hydro Hill access road and continued down to the finish line.

I headed down to the finish elated that I was going to end up second overall. This was well beyond my expectations coming into the race. I was happy that I hadn’t abandoned my original plan, no matter what happened, and that it had paid off with a good finishing time.  I was very satisfied with my overall placing, the intelligence that I ran with, and the fact that I still felt good. I crossed at 1:26:08 – one of my best half-marathon times ever and it was on a muddy, slippery, hilly off road course.

The post race festivities were great. Live music, food, and Great Lakes Brewery Blonde beer on tap. This local race is definitely a hidden gem. Cheap entry, great relaxed atmosphere, beautiful historic course, and lots of fun. The overall awards were plaques of a map of the course. I found this ironic given that I had to scour the internet to find any specific details of the actual course route, and ended up getting most of the information from past participants. I guess now I know the secret – you have to finish in the top 3 overall to see a route map!

I’m always amazed at how some running races feel like such a struggle and some, like this one, feel perfect. Going into the race I was having my doubts about even being able to push a 4:15 pace for the full distance, but I found myself running much faster and feeling great the entire time. I wish they all went like this one did! I definitely learned the value of sticking to a good pacing strategy.

I apologize for the lack of photos, I need to add taking pictures to my mental list of race to-do’s!