The first part of this post is my perspective on the running series in general.  Further down, I have posted my report from the first race on June 6th… 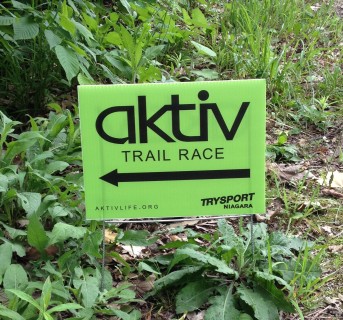 St. Catharines, ON is home to a new trail running series this summer.  Barb and Wolfgang from Trysport Niagara have organized the Aktiv Trail Running Series with 8 races happening every other Wednesday evening from June to September.  The overall series standings are based on points from the best 5 of 8 races.  I am impressed that although this is the first year of a local series, there are already nearly 80 people signed up, and I would guess that will grow over the next couple of races.  The series even has chip timing so people can be sure of accurate times! 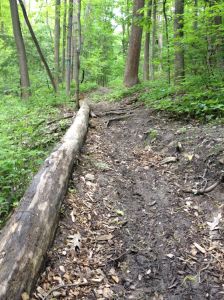 The same 6K loop is used for each race.  It is a great loop with lots of everything – there is a lot of singletrack, with a few sections of gravel road, some short uphills and a long downhill.  The first half of the course is the most challenging – from the starting line, there is a few hundred metres of asphalt road which gives some room to get everyone spread out.  A sharp left turn leads to the start of a long section of singletrack that generally heads uphill.  This part of the course ends with a short steep climb just before the 2K point.  After this uphill the course heads in behind Brock University on a wider gravel path, before going back into the trees and more singletrack.  This stretch of trail brings runners out to a gravel service road for a few hundred metres before turning back towards the finish line on some more narrow singletrack.  Next is a 500m long gravel road downhill (Hydro Hill), and then the loop finishes through one final section of winding singletrack.

I think the series has appeal for all levels of runners from beginner to advanced.  Chip timing gives a very accurate measure of your fitness level over the series and it is great to have a motivator to get out on the trail every 2 weeks.  There is a 1K kids race every week as well.  Everything was well organized, with lots of volunteers, good signage, water station, and a great atmosphere.  It was hard to believe this was the first night of a brand new series. 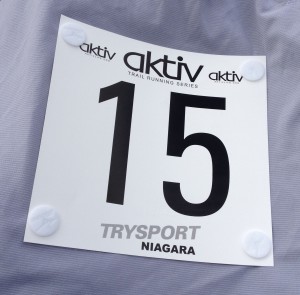 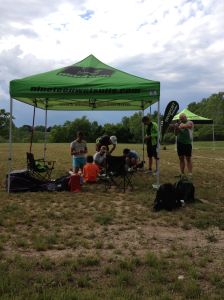 My first race went well, after an initial scare!  I didn’t know any of the competition so I wasn’t sure what to expect for this first race.  Off the starting horn, there were 3 runners that took off at a very fast pace down the road toward the start of the trail.  They obviously all had the same strategy as me – get into the first stretch of singletrack (which was technical, muddy, uphill, and with wooden bridges) before everyone else.  My first instinct was that I shouldn’t even try to keep with them at this pace, thinking I’d blow up quickly running that fast for the whole race.  Thankfully I stuck with them into the trail, and hoped I could stick with them through the course.  Things slowed down a bit when we got off the road.  After a couple hundred metres of trail it slowed down even more and I got worried we’d soon be getting caught and our group would grow.  I saw a widening in the trail and sprinted past the 3 runners ahead of me thinking I would take over at the front and push the pace for all of us.  That move wasn’t covered, and I was surprised to end up alone for the rest of the race.  Being the first runner is a race was a brand new sensation for me.  I kept the pace high, not knowing how close anyone else was behind me.  I slowed my speed to a walk on some of the steep, short uphills to try and reign in my HR.  After the race, my Garmin told me my average HR was 171 and max was 180 – definitely a short, high intensity race.  I managed to hold off everyone behind me and finished first overall in a time of 23:49.  Going into the race I didn’t think I’d be able to get under 25 minutes so I was very happy with that time.  I found a few opportunities that I hope I can improve for future races, but definitely started off on the right foot for the overall series.  This is the first race I have ever won, so it was a strange feeling!

I have been doing more trail running this spring and feel fortunate to have this type of season long series to run in – the timing couldn’t be better.  Thanks to Barb and Wolf (and the volunteers) for all the work to put it on.  Its also nice that Wolf is directing the race so he doesn’t have time to win it! 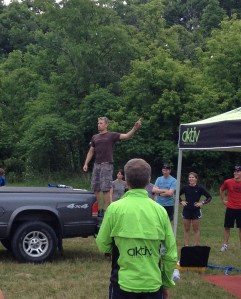 End of the race speech from the co-race director! 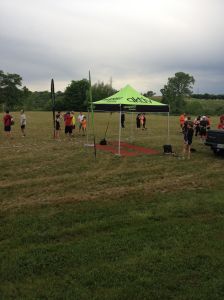